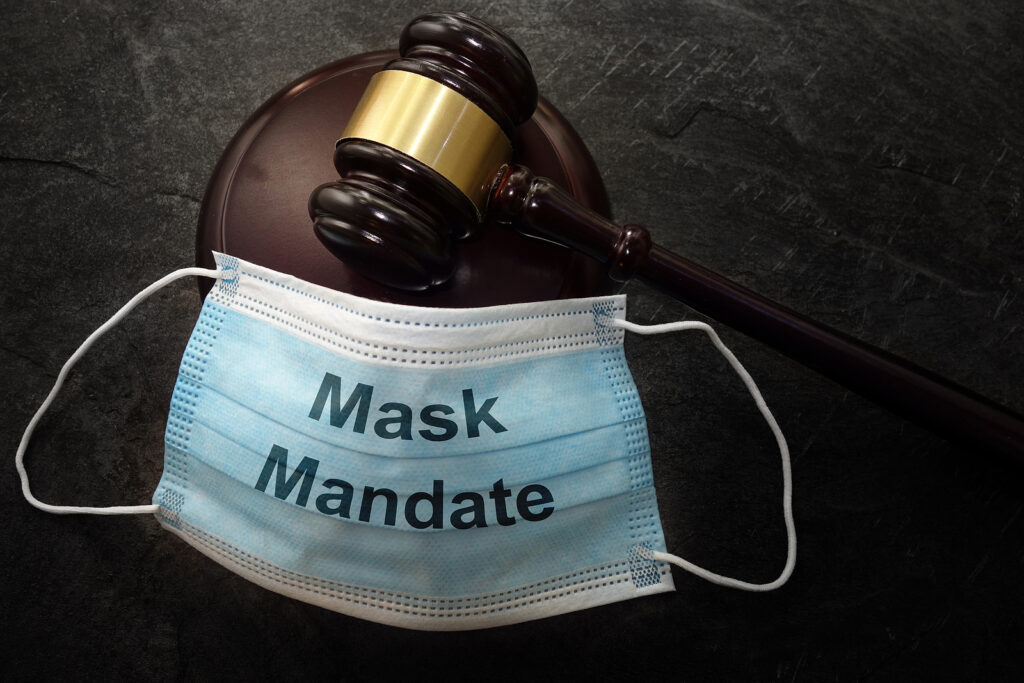 “The court cannot find any law enacted by the State Legislature that specifically gives the Department of Health and its Commissioner the authority to enact a law.”

On January 25th, the mandate was reinstated pending appeal.

When Omicron infections spiked around Christmas in New York, Governor Hochul imposed the mandate out of concern for public health. But as we see around the country, masks have become politically weaponized, running the spectrum from California’s mandate that requires the use of face masks indoors through February 15th to Florida’s prohibition of public employers from mandating vaccines and masks.

Holes in the Fabric

Unfortunately, state constitutions make little provision for a health pandemic and we are now seeing the holes in the fabric. The U.S. Constitution, under the 10th Amendment and subsequent court decisions, grants states the primary authority to take actions concerning public health emergencies. The 10th Amendment states that “powers not delegated to the United States by the Constitution, nor prohibited by it to the States, are reserved to the States respectively, or to the people,” thereby empowering state and local officials to pass and enforce these laws.

Unfortunately, these authorities have now found themselves lost in a quagmire of gray areas that have never been tested before. Depending on the political leanings of state officials and justices, we now see how something as simple as wearing a piece of cloth over your face can become political weaponry.

There Will Be More Pandemics. Will We Be Prepared?

But what happens when a new pandemic comes along that will require us to move swiftly and proactively to ensure public safety? In the past, we have seen that the Supreme Court has held that the federal government can and will act, if necessary. We have seen federal oversight in the matters of FDA approvals, FCC guidelines, and OSHA regulations.

While few of us question these, a reasonable policy to ensure public safety has become a political battering ram. In a common-sense political arena, safety measures that promote public health and medical necessity should be deferred to public health experts and not politicians. But we now live in a time when propaganda and misinformation rule and the real rules are blurred.

The Constitutionality of Health Initiatives

“Our Constitution principally entrusts the safety and the health of the people to the politically accountable officials of the States to guard and protect. When those officials undertake to act in areas fraught with medical and scientific uncertainties, their latitude must be especially broad. Where those broad limits are not exceeded, they should not be subject to second-guessing by an unelected federal judiciary which lacks the background, competence, and expertise to assess public health and is not accountable to the people.”

Will It Be Too Late?

Anti-mask sentiments profess a stance against government tyranny and overreach, but will we come to a point when we can see simple things such as mask mandates as a critical step toward the preservation of public health during a potentially fatal pandemic? While state officials have latitude over directives during an emergency, their authority is not without limits. Judicial review and the Supreme Court have precedent and may have the final word. But will it be too late by the time that we get to that point?

In the meantime, COVID-19 has presented the legal system with hundreds of situations that need to be addressed, concerning everything from employment and commercial contracts to insurance coverage.

If you are confused about your legal rights regarding a COVID-related issue, contact our New York litigation attorneys at Bukh Law Firm to schedule a consultation.